Atarax (hydroxyzine) works by blocking the activity of histamine, which is the substance that triggers the symptoms of allergies. It also exerts its action as a sedative on the central nervous system and can act as an antiemetic, acting as an antagonist of the neurotransmitter acetylcholine.

What is Atarax used for? 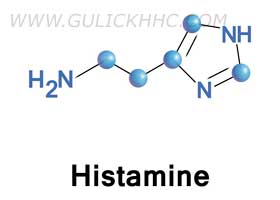 Atarax is used to relieve the itching triggered by allergic phenomena (such as, for example, chronic urticaria, dermatitis, reactions associated with histamine) as well as to control nausea and vomiting of different origins, including car sickness. It also finds use as an anxiolytic and for treating alcohol withdrawal symptoms.

Histamine is a mediator that exercises its physiological action by binding to receptors of 3 types: H1, H2 and H3. These receptors mediate inflammatory responses (H1), gastric secretion (H2) and central activity (H3). Histamine mediates pain stimuli in nerve endings, induces bronchoconstriction, skin redness and hypotension. It is also contained in mast cells and basophilic granulocytes and is released during the inflammatory process following the link between the antibody (immunoglobulin E) and the mast cell membrane; there is the release of histamine, which is contained in granules (this release is therefore called degranulation, and involves vasoconstriction, edema and activation of mediators typical of inflammation). Atarax is a selective antagonist for H1 receptors as an antiallergic agent, able to act as competitive inhibitors on the H1 receptor.

As for its anxiolytic action, the effects of hydroxyzine are produced rapidly; Atarax does not generate dependence and memory impairment, unlike benzodiazepine. The secondary effect of Atarax, which is considered more important, is the sedating one, but this tends to decrease with time. Hydroxyzine fights anxiety basically by acting as a histamine receptor blocker.

How long does Atarax stay in your system?

Atarax is used orally, rapidly absorbed, extensively metabolized in the liver by the CyP450 enzyme complex. The metabolites are still active. The duration of action generally is around 4-6 hours.

For Atarax therapy to be safe, the following drugs interactions should be observed. Important interactions have been reported with some antibiotics such as ketoconazole and itraconazole (azole drugs) or macrolides that inhibit CyP450, increasing the plasma concentration of antihistamines up to the most important toxic effects. Other interactions may occur with sedative drugs, whose sedation may increase due to effect synergy.

Atarax is usually taken by mouth in the form of capsules, tablets, syrups or suspensions to be taken 3-4 times a day. The maximum dose in adults should not exceed 100 mg per day, while it is 50 mg for the elderly. For children up to 40 kilos the maximum dose is 2 mg per kilo per day, while for those over 40 kilos the adult dose can be administered.

What are the side effects of taking Atarax?

Among its potential side effects the following are included: 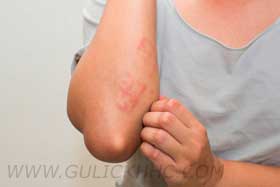 It is recommended to contact a doctor immediately in the case of:

Before taking it, the doctor should be informed:

It is always advised to inform doctors, surgeons and dentists of an ongoing hydroxyzine treatment.

This medicine can compromise the ability to drive or maneuver dangerous machinery and alcohol can increase the side effects.

The drug is contraindicated in subjects with known hypersensitivity to the active ingredient or to any of the excipients, to cetirizine, to other piperazine derivatives, to aminophylline or to ethylenediamine. Additional contraindications are the treatment with monoamine oxidase inhibitors (MAOIs) and the pre-existence of a prolonged QT interval. Unless otherwise indicated, the drug should not be given to children under the age of 12. Finally, the molecule is contraindicated in pregnant women and breast-feeding women.

What is the generic name for Atarax?

The nonproprietary (generic) name of Atarax is hydroxyzine, which is the name of the active substance used as its basis and the main medicinal component of the drug.

I have itching in my back especially at the waist, Atarax 25 mg was prescribed to me years ago. Can I repeat the treatment?

A dermatological examination is necessary to clarify the reason for your itchy symptoms. Your doctor has to look for the presence of skin lesions, even small ones, that will allow establish a correct diagnosis and then formulate a causal therapy. In the case of pruritis sine materia, that is not associated with skin lesions, a series of blood tests will be performed to exclude internal medical conditions that may cause itching. Atarax is only an antihistamine that can act positively in cases of allergic itching.

Dear Doctors, I am a 27 year old girl, I am writing to you because of a very severe itching, among other things I was prescribed atarax. I didn’t take it because I was told that it causes a lot of sleepiness and because I read in the leaflet that is an anxiolytic. I have recently stopped treatment with prozac and tegretol and I no longer want to take drugs that affect the nervous system. However, since I stopped the drugs, I have problems with insomnia, so my question is: could atarax help me? to promote sleep as well as the problem of itching? if taken in the evening, does it cause daytime sleepiness? is it an antihistamine or an anxiolytic? The many questions arise from the fact that I would like if possible to know what drug it is and what they are its effects. Thanks for your attention

Have urticaria caused by strong stress, I am on treatment with Atarax 25 mg and I take 50 mg a day, but the situation does not improve and the itching is unbearable, what can I do? I am a 53 year old woman.

Hello, Atarax seems like a very reasonable therapy to me, but if you would like to go for a more holistic approach, there are solutions to be tried alongside with the appointed medication. You certainly have gone to a dermatologist I suppose, and in support of what the doctor ordered you, I suggest you wash yourself with a mild cleanser and use aloe gel, which softens the part and relieves itching, try Bach flowers, recommended by an expert after an interview, take vitamin E. If you like to try homeopathy, take Apis. I hope I was helpful.