For thousands of years, some foods and herbs have been used to improve male sexual performance and to raise the libido. Nothing has changed: people still believe in the power of aphrodisiacs. However, there is very little scientific evidence concerning the positive effects of these plants.

Let’s compare what advantages and disadvantages one may get from using aphrodisiacs. Do they work? Are they safe? The answers to these and some other questions we’ll try to find in this article.

Aphrodisiacs and their benefits 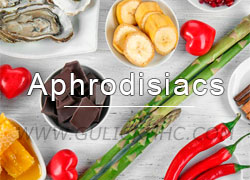 At first, let’s give a definite answer to the question of what is an aphrodisiac? It is a substance that promotes a rise in sexual desire. So, not a word about erection improvement, isn’t it? However, if a man feels the arousal, he is very likely to get an erection.

All the aphrodisiacs may be classified into several groups depending on the effect induced:

A number of more “exotic” aphrodisiacs popular in India, China, and Africa include Yohimbe, Spanish fly, deer antler, and the horn of the rhino. Unlike foods, these may induce a real danger to health.

All the mechanisms triggered by the aphrodisiacs may work well for men seeking sexual satisfaction. Yet, they are likely to be helpful only in light cases of male sexual inability.

As the scientific base for proving aphrodisiacs potency and safety is very weak, men have to be careful with the intake of some of them. To the probable negative effects of these substances belong: