Metformin hydrochloride is an antidiabetic drug of the biguanide derivative group, which lowers glucose concentration in plasma from the onset and after eating. Does not stimulate insulin secretion and does not cause hypoglycemic effects mediated by this mechanism.

Metformin hydrochloride stimulates intracellular glycogen synthesis; increases the transport capacity of all types of transport systems that carry glucose through a cell membrane; positively affects the metabolism of lipids. It has been shown that metformin in therapeutic doses reduces the concentration of total cholesterol, low density lipoproteins and triglycerides. It was reported that during metformin application, the body weight of patients remained stable or decreased moderately. 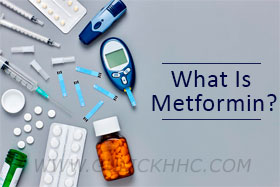 Metformin reaches its maximal concentration in blood plasma (Tmax) within 2.5 hours after the intake. The reprted bioavailability of the drug administered in form of 500g or 850mg pills is 50-60% according to FDA. The absorption of Metformin is described as intense and incomplete in medical literature.

It is assumed that the pharmacokinetics of metformin absorption is nonlinear. When using the recommended doses of metformin and dosing regimens, stable plasma concentrations are achieved within 24-48 hours and are less than 1 μg / ml. It was reported that the maximum levels of metformin in blood plasma (Cmax) did not exceed 5 μg / ml, even with the application of maximum doses.

When co-administered with food, absorption of metformin decreases and slows slightly.

Metformin eliminates hyperglycemia, but does not cause hypoglycemia. Even in large doses, it does not stimulate insulin secretion by the pancreas, so hypoglycemia does not occur. The drug does not have any significant effect on the secretion of glucagon. cortisol, growth hormone and somatostatin.

Metformin is used in the following conditions:

Metformin is used for aiding in weight loss due to its ability to accelerate the oxidation of fatty acids and inhibit the synthesis of fats, although in different tissues affects several points of application, which is expressed in diverse changes in cellular metabolism. It is also proven that the absorption of carbohydrates from the digestive tract is reduced. Metformin activates AMP kinase, thereby reducing glucose levels by suppressing its synthesis in the liver (suppressing gluconeogenesis). Recent studies have shown that exercise does not affect the overall acidity of the blood, so while you are taking Metformin, you can exercise without restriction, thereby only increasing the effectiveness of the course.

Metformin As An Anti-Ageing Drug 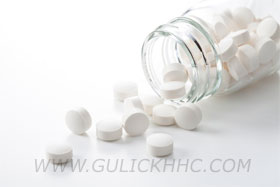 A new study was conducted under the guidance of professors Wang Chih-chen and Liu Guang-Hui from the Institute of Biophysics of the Chinese Academy of Sciences. The researchers were able to demonstrate that long-term administration of small doses of Metformin to cell culture slows down cell aging, especially in diploid fibroblasts and mesenchymal stem cells.

The concentration of GPx7 decreases as the cell becomes “decrepit,” and artificially reducing the amount of GPx7 accelerates cell aging, the researchers said. It is also interesting that the chain “Metformin – Nrf2 – GPx7” plays a certain role in the aging process of worms, and the analogue of human GPx7 in the body of worms is necessary for metformin to have a positive effect on the life expectancy of animals.

These results combine to highlight the significance of the “Nrf2 – GPx7” signaling pathway for longevity and indicate the need to look for additional evidence that metformin can be useful as a means of increasing life expectancy in humans.

Metformin increases insulin receptor sensitivity to insulin, improves glucose uptake by muscles. Reducing insulin during weight loss is necessary because this hormone contributes to the deposition of nutrients in the fat, especially if the main problem area – the stomach. Immediately after a meal, the level of glucose in the blood rises sharply, to which the pancreas responds and produces insulin, which in turn forces the tissues to consume glucose, string is as fat. That is why in almost all diets for weight loss it is recommended to consume fewer foods that causes a spike in blood sugar.

Finally, insulin causes hunger, so metformin helps to suppress hunger during weight loss. The effectiveness of metformin decreases with increasing acidity of the blood, so some authors recommend eliminating exercise during the course of Metformin, since exercise leads to the formation of lactic acid. 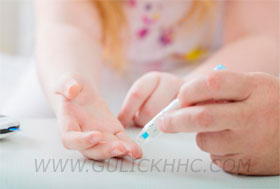 Metformin is a safe drug approved by FDA for use in healthy individuals for the purposes of weight loss.

Metformin for weight loss is taken immediately before meals or during meals, the dose is selected individually. Most often prescribed 500-850 mg, 2-3 times a day (maximum dose of not more than 3000 mg / day). If you have diarrhea, dial down your carbohydrates. If you have nausea after taking metformin, reduce the dose. Slow increase in dose may improve gastrointestinal tolerance. Perform systematic aerobic training to maximize the effectiveness of the course.

If, after reducing the dosage, the symptoms of side effects have not disappeared, stop taking the drug and immediately seek medical attention, as there is a risk of lactic acidosis, which is fraught with death! In the event of signs of lactic acidosis, the patient is urgently hospitalized and, having determined the concentration of lactate, confirm the diagnosis. The most effective measure for the elimination of lactate and Metformin from the body is hemodialysis. Symptomatic treatment is also performed.

The duration of the drug should not exceed 18-22 days, after which you need a break for 1-2 months. A shorter break leads to the adaptation of the organism, and Metformin is not able to show the properties of a fat burner to the full. The course must be agreed with a medical specialist.

Metformin And Spironolactone: Concomitant Use In Polycystic Ovary Syndrome

Metformin taken at adequate doses (500 mg or 850 mg three times a day) has an anti-inflammatory action, partially reduces the production of androgens and is able to improve the rate of ovulation and reduce the risk of early abortion in pregnant women. This therapy is even more useful given the withdrawal from the market of silbutramine. Unfortunately, it is often not well tolerated by the patient and produces gastrointestinal disorders that induce suspension. It can also be given to thin women with insulin resistance.

An excellent result is obtained when Metformin is used alongside with the only preparation that can be used without risk of the group of antandrogenous drugs, Spironolactone which, besides having an antiandrogenic action, also has an antialdosteronic action and is therefore an anti-inflammatory and anti-atherogenic. Spironolactone reduces the hypoglycemic effect of metformin.

Metformin is used as a part of combined anti-glycemic agent alongside with Glipizide. Glipizid is a second-generation sulfonylurea derivative that fosters secretion of insulin by the leaver thanks to its ability to minimize the threshold for pancreatic β-cell irritation with glucose. Glipizide increases glucose release and the degree of its binding to target cells. The drug’s efficiency is determined by the number of functioning β-cells. It inhibits aggregation of platelets, and produces a fibrinolytic, lipid-lowering and weak diuretic effect. Taken concomitantly, those to anti-glycemic agents complete each other’s action and provide more significant health outcomes in a more compact time span. 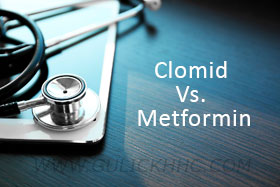 The study, carried out by researchers from the Magna Graecia University and the University Federico II of Naples, involved 80 infertile, anovulatory (who do not produce eggs), suffering from polycystic ovary syndrome. Patients were allocated in two comparable groups by body mass index (BMI) and age. The experimental group was treated for 6 months with 1700 mg / day of Metformin, while the control group received Clomifene using an incremental dose protocol. The study showed that both Metformin 1700 mg / day and Clomifene represent two first-line approaches able to improve fertility in anovulatory women suffering from polycystic ovarian disease.

Do not take Metformin if you have one of the following conditions:

Metformin rarely causes adverse events. The possible side effects of Metformin are:

As a rule, the side effects of Metformin occur at the beginning of the course, and then quickly pass. They can usually be minimized by increasing the dose of the drug gradually and taking it with food. With long-term treatment with metformin, the absorption in the gastrointestinal tract of vitamin B12 and folic acid is often impaired. The absorption of vitamin B12 is normalized by intake of dietary supplements containing calcium.

I take, for my diabetes 2, metformin 50 mg / 850 for lunch and dinner. At lunch I also take aprovel of 150. After 1 hour I have diarrheal discharges. What can be done?

Dear user, the symptom complained of is likely to be related to Metformin. Ask your prescriber if they can appoint Galvus in combination with Metformin for you. Normally, using, for the latter, an initial 250 mg dose (corresponding to 1/2 cp of 500 mg metformin) can normalize stools in patients suffering from Metformin side effects. The dose should be always appointed by your prescriber; the general guidelines is that if the dose is well tolerated, a patient can continue for 7-10 days and then try to step it up to the dose of 500 mg, but then again, only under consistent supervision of the prescriber. Best regards

My husband suffers from type 2 diabetes; he was prescribed Metformin also because he was overweight and actually lost 40lbs after starting on the drug. Can a person who does not have diabetes but is overweight take Metformin? Thanks best regards.

Metformin can be used at a suitable dosage, but in selected cases, such as eg. polycystic ovary syndrome or insulin resistance. Ask your doctor for advice.